<$BlogRSDURL$>
Christina's LIS Rant
Tuesday, May 30, 2006
The carnival is coming.... I'll be hosting the Carnival of the Infosciences #40 which will be posted next Monday. Please submit your posts to cpikas {at} gmail.com with the word Carnival in the subject line.  ¶ 9:11 AM| (0) comments |cites (technorati) |

Thursday, May 25, 2006
Should you have trouble sleeping.... I've posted my major intellectual work of the semester on the web (Attribution-NonCommercial-ShareAlike 2.5 License). Thank you all for suffering through my updates. BTW- this did get me through my quals successfully (Yay!)

Well there's dumbing down, and there's dumbing down! I really like TechEssence -- understandable postings on techie topics but in an accessible style. In general, I've changed my mind on my complaints about "dumbing down" the interface -- but with some caveats. Read this post from TechEssence and pay particular attention to the comment from Jonathan Rochkind.

One of his points is kind of like the duck thing: placid on the surface and working like crazy underneath. He says:

Part of the issue is that doing this stuff is HARD. Is keyword search inherently untrustworthy? Google proves not neccesarily, but the thing is, the _genius_ of Google is that it made keyword search actually work! This is not an easy thing to do, and they did it, actually, not just with a straight keyword search, but by recognizing that incoming link text is a kind of descriptive metadata. We don't have the same kind of metadata in a library catalog.

So I get frustrated when people think, gee, Google works, Google is keyword search, so if we just do keyword search in our catalog, then it will work, and be as good as Google, cause that's what we need to do to compete with Google. There are so many misconceptions there.

So yeah, we should figure out how to make the catalog easier to use, part of that is figuring out how to get a 'single box' seach that works (for SOME purposes), but it's not easy to do, and won't come just from trying to ape Google.

So yeah, if the interface is cleaned up and simplified and makes sense... but then you get facet options to refine (a la EV2 or Endeca or the new Primo)... stuff that really makes your great metadata work for you (thanks to Lorcan Dempsey at CIL for this thought), then yeah, cleaning up is great.

If, on the other hand, you take away options and features (so now in EV2 no way to browse for classification codes), you give mystery meat buttons and answers (some catalog implementations)... then it is dumbing down and it's not helpful.  ¶ 3:07 PM| (0) comments |cites (technorati) | 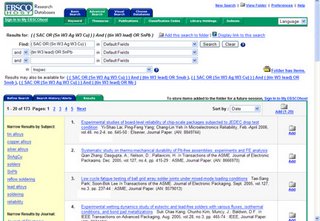 I initially mentioned in passing that I had some concerns with the EbscoHost implementation of faceted search. I will now proceed to rant on the subject.

They've designed one interface to be used for everything from MasterFile Premier (for public libraries) to Inspec. I use Inspec via EbscoHost and here are big issues

1) They group DE and ID -- non-librarians won't know the terms but they will suffer for this. In the facet on the left hand side, the terms are not orthogonal and can be a bit bizaare. That's because you have identifiers or, as they say, "key phrases" stuck together with the controlled vocabulary. This is really misleading because you won't know which is the preferred term that will get you all the hits. Also, you only get 10.

2) The spelling suggestions are bizarre -- they must have bought them off the shelf from someone instead of taking them from the words actually appearing in the database. They thought Snob would work better than Sn-Pb -- in Inspec, for heaven's sake.

3) We're supposed to figure out that we can remove the narrowing terms by clicking on the link for the term prior. I dunno, anyone guess this or watch the tutorial?

I'm glad that they're working on the interface and adding cool things, but they really aren't there yet. Notice we have more than one facet, too. I think our local admin had to turn that on because the default was to offer only one facet. Sigh.

Yeah, I get why it's nice to have a standard interface, but the things available through it are so extremely different from each other, that there really needs to be more customization for the audience and the quality of the metadata in the database. Some databases don't have decent fields and quality data to work with, but Inspec does.  ¶ 10:39 AM| (1) comments |cites (technorati) |

I was reading this article at the end of the day yesterday and I have to say that I respectfully disagree with the entire thing from definition to application. She starts with, "SCHOLARLY communication is evolving from a buzzword into a discipline" -- excuse me, but the study of scholarly communication as a discipline has been active since the late '50s - early '60s. Look at Menzel, Hagstrom, deSolla Price, Garfield... and the whole APA-JHU project in the late '60s and '70s with very important work by Garvey, Griffith, Lin, Nelson, Tomita...

"The next step is putting fingers to keyboard and Writing the manuscript. This is done by scholars when they are ready to submit their works to a print or electronic publication. At this stage, they have complete control over their intellectual properties. All their sweat and hard work in the creation of their articles or books becomes a commodity called copyright, which has an economic value and can be traded."

I would argue that a significant part of scholarly work is owned from conception by the funder as well as the researcher (she does mention this much later). Also, intermediate reports have been written as well as delivered orally so the journal paper won't be the first written step.

She says "Printed journals and books were the primary media of scholarly communication," -- they were not primary in many senses. Members of the invisible college were quite aware of the results of research by informal communications. Also, conference presentations and technical reports were very important as informal communication. The gold standard, the journal publication, is most important for reputation and reward structures, but not for the actual progress of science in many cases (this hasn't changed). I'll put my article online after I'm done with quals on Friday. I would also argue that scientists don't necessarily care about the price of the journals. They will get pre-prints and e-prints if necessary.

She continues, "increasingly, commercial publishers see intellectual property as a commodity. They have created tighter restrictions, affecting the flow of scholarship, which result in publishers punishing authors for posting on the authors' own Web sites" -- publishers have always seen IP as a commodity, I think. That's how they stay in business. Societies, like ACS, use their publishing arm to sponsor society activities, so they, too, use IP as a commodity. I'd also like to know who she's talking about in particular about punishing -- almost all of the big commercial publishers have allowed some posting of preprints because of the pressure from librarians and scientists (even Elsevier and Springer).

I totally agree with this statement, "Nevertheless, some nonprofit organizations have outsourced their publishing logistics to the commercial publishers and don't even know if their publishers are predatory or reasonable." I also agree that scholars need to be much more cognizant and protective of their copyright, but as she said, there are many factors that go into decisions on where to publish.

As for "OAJs are accessed primarily by directed searches rather than by traditional browsing" -- I think that's actually true of e-only journals vs. e and print. For example, we get a print copy of PLOS and researchers do browse that. PNAS has some open access articles, too. I think getting TOC alerts by e-mail or RSS is actually browsing, not directed searching but I'd be willing to accept arguments against that.

She ends with discussion of disaggregating the journal article and some statement about scholars not being able to do more publishing on the same topic because of rules about derivative works. Huh. Don't get that at all, because scientists have been sharing data and notes (in certain tightly integrated research areas) forever. Also, we all know many cases in which you see basically the same article in a conference proceeding, journal article, and then book chapter over the course of a few years; so in science, at least, this has not been a concern. Copyright is not the same as patent, by far, and even when publishing in traditional commercial journals, there's no problem doing and publishing more research on the same topic -- or else all PhDs would be out of business from the start.

So, as you can see, I've been pretty hard on this article here. I'm also not sure it was appropriate for its venue or that it's really a complete thought. She has much more on her web site, but it still looks like a work in progress. Maybe she just simplified her framework for publication in this magazine, but in doing so she really muddied a few points. IMHO.

BTW- I love Online and it has quite a few really interesting articles this month.  ¶ 9:39 AM| (0) comments |cites (technorati) |

Monday, May 15, 2006
SLA IT Division at the SLA 2006 Baltimore: CE Course, Weblogging for Beginners I know a lot of people still haven't taken the plunge into blogging because they're still a little unsure about how to do it... If you're in that crowd or know someone who is, consider taking this fabulous course from Catherine.
SLA Information Technology Division Proposed Programs at the SLA 2006 Baltimore Meeting: "1:00pm–5:00pm

Continuing Education Course- Weblogging for Beginners: A Practical Approach
Should you jump on the blogwagon? Is it really easy? Is it really useful? Come and learn the basics of weblogging: the what, who, why, when and how of easy web publishing for librarians and libraries. Planning, purposes, technology (including feeds) and maintenance will be discussed. A nice mix of theory and hands-on practice awaits curious beginners.
Speaker: Catherine Lavallée-Welch, Associate Librarian, University of South Florida – Lakeland
IT Lead Program"  ¶ 9:15 AM| (0) comments |cites (technorati) |

Tuesday, May 09, 2006
Well, it's just good that they don't let me hold the checkbook Read some liveblogging from the ExLibris Primo Webinar I also just attended from http://neoarch.wordpress.com/2006/05/09/liveblogging-the-primo-webinar/ .

Like Endeca -- it's not a replacement for your ILS, it's an overlay. It also takes stuff from other repositories, MetaLib, SFX... allows tagging, allows users to contribute reviews... faceted presentation of results, RSS feed....

On the negative side, I'm sure it would be a social engineering miracle to get it implemented.  ¶ 3:29 PM| (0) comments |cites (technorati) |

This is my blog on library and information science. I'm into Sci/Tech libraries, special libraries, personal information management, sci/tech scholarly comms.... My name is Christina Pikas and I'm a librarian in a physics, astronomy, math, computer science, and engineering library. I'm also a doctoral student at Maryland. Any opinions expressed here are strictly my own and do not necessarily reflect those of my employer or CLIS. You may reach me via e-mail at cpikas {at} gmail {dot} com.

Laurel , Maryland , 20707 USA
Most Recent Posts
-- Moved to Scientopia
-- I've been assimilated!
-- Hey science librarians...
-- Can we design *a* community for *scientists*
-- Comps readings this week
-- How would you design a collaboration community for...
-- Why ghostwriting, ghost management, and fake journ...
-- Should authors attest that they did a minimal lit ...
-- Comps preparations
-- How should advertising work in online journals?

Some of what I'm scanning