<$BlogRSDURL$>
Christina's LIS Rant
Sunday, April 26, 2009
Comps readings this week Diffusion of innovations questions figured prominently in the folder of comps questions - seemed like nearly everyone had a question relating this area to another area, so this finishes up the readings I had on diffusion of innovations. (this post was added to throughout the week and finished after the post on comps preparations. there will probably still be some posts on comps readings, but I'm supposed to be doing more integrating now - and not in the fun math way!)

user's perceptions of technology influence intention to use the technology >
user perceptions differ by gender
This article looks at how gender impacts "intention to use" IM. The standard Rogers things: perceived ease of use, relative advantage, compatibility, observability (broken down into visibility and results demonstrability), plus perceived critical mass. Note that all of these have been studied by people other than Rogers, and they are all "perceived" - it's not Gartner's assessment of relative advantage, it's what the user thinks. They also review the extensive literature on gender differences in communication- both in person and online. The participants were business students who were of course heavy users of icts. They did a survey, and used scales from other studies for most items and made their own for perceived critical mass. I'll leave the stats to anyone who's interested to read. The men were into relative advantage,semonstrability , and perceived critical mass. Women were into ease of use and visibility. This matched with the hypotheses.

This article compares 8 models of IT acceptance research and comes up with a unified model. The original 8 models were tested to see how much variance they explained, then the new model tested against the first set of data (improvement) and then the new model against new data (decent adjusted R^2).
The 8 models:

For each of these things, there are "moderators" including experience, voluntariness, gender, age. There might also be things about the industry, job function of user, and things about the technology itself - but these aren't considered here.

Some of the limitations of previous studies were that they were mostly done with students, they were done retrospectively, they were done with completely voluntary innovations (but managers need to know how to get employees going), and the technologies were fairly simple.

The authors find 4 organizations in 4 different industries with samples drawn from different functional roles, and give a survey immediately after training on a new technology, a month later, and 3 months later. They also gather "duration of use" for 6 months after the training to look at actual usage. The questions are taken from scales from the studies supporting the 8models and were pre-tested and tweaked... then follows a lot of statistics and testing for validity, reliability... etc. The 4 orgs were grouped into 1a + 1b (voluntary) and 2a + 2b (mandatory). Essentially the older models each accounted for at most between 40-50% of the variance in intention and usage.

The new model (for fear of getting in trouble, I'm re-drawing) 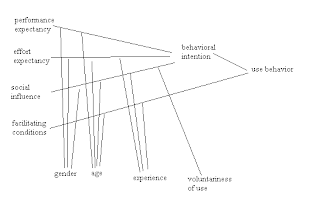 Each of these pieces is pulled together from pieces of the 8 models - so they use the questions from the other models, and group them together this way. They did the standard tests to see if they hung together and tested some hypotheses about the moderators. They then got data from 2 more orgs and ran the new model against that. It essentially worked pretty well. The new model accounted for like 70 percent of the variance of usage intention. There are definitely some limitations - partially due to sample size and the shear number of variables.

Comments:
Ah, wish I've read this post before writing my int. paper. TAM, TPB and Rogers waltz in around the end of the paper, but I had to come by them incindentally (as there's no "real" committee at this stage).

This is my blog on library and information science. I'm into Sci/Tech libraries, special libraries, personal information management, sci/tech scholarly comms.... My name is Christina Pikas and I'm a librarian in a physics, astronomy, math, computer science, and engineering library. I'm also a doctoral student at Maryland. Any opinions expressed here are strictly my own and do not necessarily reflect those of my employer or CLIS. You may reach me via e-mail at cpikas {at} gmail {dot} com.

Some of what I'm scanning